It’s no secret that I am a huge fan of power pop. Allegedly, the term was coined by the Who’s Pete Townshend to describe the music that the band was playing in the pre-Tommy years. He said: “Power pop is what we play—what the Small Faces used to play, and the kind of pop the Beach Boys played in the days of ‘Fun, Fun, Fun’ which I preferred.”  The genre was carried forward by bands such as Cleveland’s own Raspberries, Apple Records recording artists Badfinger and Big Star from Memphis to name a few. Power pop waxed and waned during the early to mid 1970’s but by the end of the decade and into the early 80’s, there were many active bands who fit that bill. Fortunately for us, one of the best was a trio out of the Akron suburb of Stow, Ohio called the Action.

The Action was charged by the songwriting of guitarist/vocalist Michael Purkhiser who along with bassist/vocalist Brett Warren and drummer Brian Shearer (replaced later by Cliff Bryant) cut their teeth playing 60’s style, Beatles influenced rock with a new wave edge in clubs around NE Ohio.  The band released three singles between 1978 and 1982 on their own Radiogram Records.  All three singles are incredibly rare but fondly remembered today not only in the Cleveland, Akron and Kent metro area but by connoisseurs of power pop throughout the world.  Like a number of bands from NE Ohio at that time, the Action ventured to New York City for gigs at Harrah’s and CBGB but even though approached by the suits, nothing developed for them.  While the Action retained a strong fan base at home, by the mid 1980’s the band had run its course.

Michael Purkhiser moved on to play in rockabilly legends, the Walking Clampetts from 1985 to 1990.  In late 1997, he teamed up with our favorite Rock ‘N Roll Mercenary, Marky Ray and formed 3D, another vehicle for Purkhiser’s tight and introspective songwriting.  3D released one EP, Universal Conquest in 1998 and left enough material for at least one additional album when that band broke up, some of which I will feature on a podcast with Marky Ray in the not so distant future.  Michael Purkhiser currently lives on the West Coast.

Go here to listen to all three singles from the Action.

Go here to see a video from 1981 of the Action performing the Flamin’ Groovies’ “Shake Some Action” at the Rathskeller in Kent. 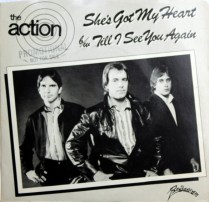