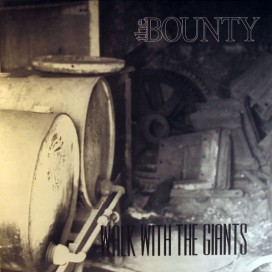 I am truly humbled and excited to be writing this post.  I received a Facebook message earlier this week from vocalist Jim Kozelek who fronted the Columbus band, The Bounty in the late 1980’s/early 1990’s.  A little history here – The Bounty, while from Columbus, had a very strong following in NE Ohio and played a number of gigs here on the Northcoast.  The band released an LP, Walk With the Giants in 1991.  Two tracks from the album appeared on two different Jim Clevo Presentations compilations.  “Buffaloes” appeared on the 1990 The Killer Blow disc while the album’s title track (one of my favorites) appeared on 1991’s Clearing the Air double CD compilation.  The Bounty disbanded circa 1992 and seemingly disappeared into the ether.  As I was compiling music for the project, I picked up a vinyl copy of their album and it’s become one of my favorites of the era.  While I didn’t get to see the Bounty perform, I could tell they must have been a great live band.  After a little detective work, I discovered the band’s Facebook page and learned that, lo and behold, they were back at, reuniting for an acoustic show in September 2017 and working on new music.

Well, the work is done and ready to go.  Based on a good word from my guru, Satan himself Jim Benson, Jim Kozelek reached out to me and asked if I would like to be the first in NE Ohio to release some new Bounty music.  My response – “Of course, I do!”  Almost 30 years after the release of Walk With The Giants, The Bounty is ready to release their sophomore effort, Everybody Loves A Second Act.

From the band’s media release:

The Columbus, Ohio band The Bounty will release, in electronic format only, the 10-song album Everybody Loves a Second Act.

Everybody Loves a Second Act belatedly follows the nine track 1991 release Walk with the Giants.

“Unlike Walk with the Giants, which was recorded one song per session at the Recording Workshop, this was really the first time we were in a studio where we could do what we wanted. So there are a lot of different guitars and vocals, a lot of different textures and melody lines to the songs” said Jim Kozelek.

So here’s two songs from The Bounty’s soon to be released new digital album.  If you like them, comment below and then go the the band’s Facebook and give them a “like.”  When you’re done there, check out the full release of Walk With The Giants at my YouTube page.