“The Moth don’t care when he sees The Flame.  He might get burned but he’s in the game.  And once he’s in, he can’t go back.  He’ll beat his wings ’til he burns them black…” – Aimee Mann

Just as I have a reason for starting my posts of Cleveland compilations with From the Eerie Shore, my individual band release posts start with the self-titled EP by the Gypsy Moths.  Around the first time I heard “Eerie Shores,”  (fall 1988) once again I was at Magnetic North Studio, probably handing over cash to my mentor, Chris Keffer for studio services rendered.  Knowing I had a growing interest in learning to engineer, he invited me in to sit in on a session for a band called the Gypsy Moths.  Unfortunately, I had to work (to make money to give to Chris and pay my car insurance) and couldn’t make it.  I still kick myself for not calling in sick!  Sometime around the beginning of 1989, I was back at the studio and Chris played me the finished tracks that the Gypsy Moths recorded.  What I heard coming from those speakers cemented my dedication to writing original music. Chris gave me a copy of the cassette and I played it over and over.  I still have that tape and still listen to those songs in awe.

The Gypsy Moths were Leo Walsh (later aka Leo P. Love) on drums; Joe Milan on bass and both JD Spinner and Bill Stone on guitars and vocals.  The music was simple and catchy – very catchy.  The clean, chiming guitars were just as powerful as any Gibson Les Paul through an overdriven 100 watt Marshall amp.  The rhythm section of Walsh and Milan provided a tight foundation underneath it all.  It’s hard to categorize the four songs on this EP so I think you will need to listen for yourself and decide (I hear shades of power pop mixed with a little bit of punk attitude).  The band also had tracks on two Jim Clevo Presentations: “Run Away” with JD Spinner on lead vocals featured on Another Listen Is In Order and the scorching “Without You” on The Killer Blow.  And they had THE best gig flyers of any Cleveland band (see below).  Even with the punk influence, this was, without a doubt, something different than what had been emanating from the Northcoast since the mid 70s.

The Gypsy Moths soldiered on until sometime in 1990.  Along the way, the band added keyboardist Lou Vogel (aka Lou Vox) and both Joe Milan and JD Spinner left replaced by other musicians leaving Bill Stone and Leo Walsh as the only members during the band’s duration.  From the ashes of the Gypsy Moths, though, came a number of bands that made a huge impact on the Cleveland music scene in the 1990s and Bill Stone was right in the thick of it.  But those are stories for another day. 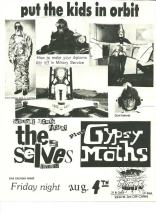 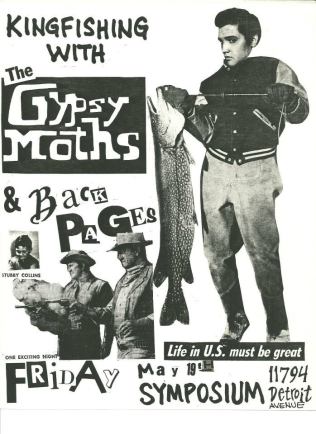