I have it all up in my head, charted out neatly.  I know where I want to start and where I want to stop.  It’s all the stuff in between that I have to organize and put down on paper so that I can cover all the bases in this project.  I hope you’ll bear with me.  Let’s set the stage for the start.

Cleveland, Ohio in 1985 was finally coming out of decades of economic doldrums. For what seemed like an eternity, northeast Ohio, once a center of manufacturing, strongly felt the results of a recession which included high interest rates for home mortgages, the loss of good paying jobs in the crucial steel and automotive industries and white flight into the far suburbs such as Solon, Brunswick and Westlake. The local music scene in the mid to late 1970s/early 1980s reflected the tough times felt by those who stayed the course and stayed true to their blue collar Cleveland roots. The punk/protopunk scene was one of the few bright moments during that time. Those who lived through that time and were part of it still speak of those years with reverence. Legendary bands like Rocket From The Tombs, The Dead Boys and Pere Ubu formed by musicians such as Peter Laughner, Stiv Bators and David Thomas took their angst out through loud, messy, angry and sometimes, strange music. Attitude ruled over musical proficiency in most cases and image ruled more than anything else.  A DIY approach in promoting bands (purely out of necessity) helped spread the word at a time when the Internet was the exclusive playground for academics.

A great snapshot of the Cleveland punk era is found on two releases.  First, the Soul Jazz Records 2015 release, “Punk 45: Extermination Nights In The Sixth City! Cleveland, Ohio : Punk And The Decline Of The Mid West 1975 – 82” contains songs from some very legendary and highly influential bands like The Pagans, Pere Ubu, The Electric Eels, and Rocket From The Tombs. The second important release is the groundbreaking compilation LP, “They Pelted Us With Rocks And Garbage” from 1985.  This album bridged the two eras and served as the prototype for the compilations that were to come over the next ten years. 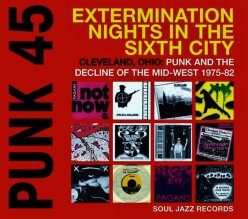 As the economy began to strengthen and Cleveland began to reinvent itself, the punk scene gradually gave way to something new, something different. While one could still find the loud angry punks playing dive bars on either side of the Cuyahoga River, variety was stubbornly but successfully making itself known. By 1985, it was evident that something was happening as power poppers, post new wavers, metal heads, avant-garde disciples and the synth riders were becoming just as prominent as the punks in the bars and clubs.  The door to something great was opening…….